It might be considered the Sabbath to some, but regardless of the day, the newly repaired coffee maker doesn’t get the day off. The only time it’s gotten a day off in the last ten plus years is when it breaks down.

As the coffeemaker ground the beans for another cup I was feeling relieved. It’s not too many mornings that I get to have coffee at home, or in an open top ceramic cup. It’s usually in a metal screw top cup with the flap on top the slides open to allow you to sip coffee while driving the beat up Phoenix streets and not end up with half the cup of hot coffee in your lap.

I’m sipping that coffee with the perfect dose of half and half mixed in while I type. It’s been awhile since I’ve written, much less read, anything. When I get busy, which happens a lot, I recall some other times in my life that I’ve been busy. I think about “Remember the Sabbath and keep it Holy” phrases from childhood.

I also have the “ox in the ditch” words from Jesus in Luke floating around my head. It’s amazing how most of us are prone first to justify or blame someone else for our circumstances. We come by it honestly. Adam blamed the “woman” and then God Himself. After the massive fail he was trying to blame everyone involved… except himself.

There was one particular summer, an extra hot one, I worked over a hundred and twenty days in a row. I took advantage of the long days of summer to work fifteen hours a day in the punishing sunlight framing houses, lots of them. I’ve never been a “40 hour a week” guy.

I have another appointment with the skin doctor in a couple of weeks. This time the spot flaring up that will have to be burned, actually frozen to the point of blistering, is on the back of my left tricep. Beats having it on my nose again.

Whatever I may have gained back then is gone like the dinosaurs. I’m still struggling with the whole “work smarter not harder” thing. And if I was younger, I might try to blame someone else. It was my parents that moved us to the “devil’s bedroom” after all.

But it’s on me. The skin issues, the “wearing yourself out trying to get rich” issues. The workaholic issues, they’re all mine.

Maybe the coffee maker breaking down is a sign? We’re appointed to take time for rest, to recharge. It’s good to get God given rest… instead of going without a day off, like that coffee maker, and breaking down. We all get down time… one way or the other.

I appreciate a day of rest. It’s a gift from God, literally. I’ll talk to Him today, read His Word… and have another cup of coffee. This one’s gone now.

HOGWASH THE PEN AND THE SWORD 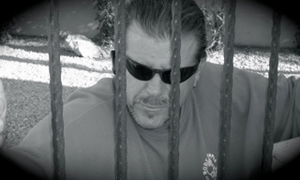